MR Formula is natural herbs based preparation, intended to prevent the scales and loss of hair. It is made of seven various, medically tested and proven herbs growing in the Goc mountain, at a height of 800 meters, on the best Serbian area for medicine herbs. MR Formula prevents the loss of hairs, removes the scales, revitalizes the skin and promotes the hair growth.

How MR Formula was born 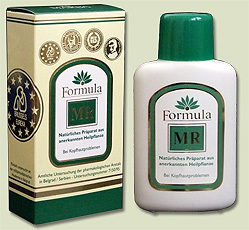 As my profession is hairdresser, I have been intensively occupied during last 30 years by the diseases and changes of the scalp skin and hair root. Within this period, I noticed that the hair loss is gradually increasing, and becoming a great problem for both, men and women. During last 15 years, I was especially occupied by this problem. Studying the old sources and medical literature I stated that the rich treasury of nature contains the herbs possessing a healing capacity to prevent and eliminate the hair illnesses. I started to make the extracts of different herbs and to test their effect on myself and some fiends of mines. Within a long-term experience, this extract of seven herbs has been proven as effective. I continued testing of susceptibility and harmful matters, as necessary for dermatology applications.

For what MR Formula is used

MR Formula has shown the best results in alopecia. The alopecia is known as scaling and round area hair loss including the dry skin and itch, followed by circles of loss of hairs. Even after the first application of MR Formula the further scaling and hair loss is prevented. MR Formula indeed, doesn’t eliminate completely the illness, as the reasons of disease have not yet been scientifically proven. One of possible alopecia causes could be psychosomatic, other neurological. MR Formula prevents the symptoms by cleaning and calming the scalp skin. Positive effect of medicine herbs revitalizes the scalp skin creating a sense of freshness. After a thirty-day application, the yellow and damaged areas on the scalp skin recover their original colour, the hairs start to grow normally.

How MR Formula is applied

After hair wash, MR Formula is applied gently and massaged into the hairs skin. The process is repeated within three following days, without hair wash. The fourth day, the hairs to be washed and treatment repeated until the illness is eliminated.

How to apply the MR Formula for seborrhoea

The preparation is applied once per day until seborrhoea disappears. A sense of cooling and picking is a sign of the preparation activity, since the scalp skin is being revitalized.

How MR Formula is applied for alopecia

MR Formula is applied and massaged one or two times per day on the areas of lost hairs. This treatment to be continued during three months after elimination of symptoms.

What to have in mind

MR Formula is not a medicament. It is a dermatology product for external use only.

MR Formula is not intended for internal use.

This preparation is not to be used in the same time with hair painting or mini-wave application.

When applying a mini-wave, the scalp skin is exposed to a permanent stress. The medical alcohol included in MR Formula would in this case increase the etching to save the extract of the medicinal herbs.

After mini-wave, during seven days to avoid any hair treatment.

When hair painting, the scalp skin is very irritated by the ammonium or hydrogen peroxide. Formula MR is not to be applied until such an irritation lasts.

Why MR Formula has not been sold earlier out of Serbia

As a first reason, the past political system prevented the free economic relations.

Second, I had not earlier an interest to market this product largely. The quantity of my product, dermatologically tested in VMA (Military Medical Academy, Belgrade), is depending on the availability of medicine herbs, resulting in limited annual production. When the herbs are not available, the production is stopped.

Why MR Formula is at all sold out of Serbia

This is depending only on the economic circumstances. After the market opening, the prices of raw materials, production means and earnings, increased rapidly. Prices of medical alcohol and other necessary components were doubled. Here in Serbia my production costs are so high that the home customers could hardly pay for this product.

Since in the past I had not a full production, the production process was really very expensive in regard of produced quantity. I was using only the available capacities, while now I could achieve a more favourable production. As the production costs have to be rented, I have to increase the marketing extent.